The pin tumbler lock (or Yale lock, after lock manufacturers Yale) is a lock mechanism that uses pins of varying lengths to prevent the lock from opening without the correct key. Pin tumblers are most commonly employed in cylinder locks, but may also be found in tubular pin tumbler locks (also known as radial locks or ace locks).

In 1805, the earliest patent for a double-acting pin tumbler lock was granted to American physician Abraham O. Stansbury in England. It was based on earlier Egyptian locks and Joseph Bramah‘s tubular pin tumbler lock. Two years later, Stansbury was granted a patent in the United States for his lock.[3]

The pin tumbler is commonly used in cylinder locks. In this type of lock, an outer casing has a cylindrical hole in which the plug is housed. To open the lock, the plug must rotate.

The plug has a straight-shaped slot known as the keyway at one end to allow the key to enter the plug; the other end may have a cam or lever, which activates a mechanism to retract a locking bolt. The keyway often has protruding ledges that serve to prevent the key pins from falling into the plug, and to make the lock more resistant to picking. A series of holes, typically five or six of them, are drilled vertically into the plug. These holes contain key pins of various lengths, which are rounded to permit the key to slide over them easily.

Above each key pin is a corresponding set of driver pins, which are spring-loaded. Simpler locks typically have only one driver pin for each key pin, but locks requiring multi-keyed entry, such as a group of locks having a master key, may have extra driver pins known as spacer pins. The outer casing has several vertical shafts, which hold the spring-loaded pins.

When the plug and outer casing are assembled, the pins are pushed down into the plug by the springs. The point where the plug and cylinder meet is called the shear point. With a key properly cut and inserted into the groove on the end of the plug, the pins will rise causing them to align exactly at the shear point. This allows the plug to rotate, thus opening the lock. When the key is not in the lock, the pins straddle the shear point, preventing the plug from rotating.

Without a key in the lock, the driver pins (blue) are pushed downwards, preventing the plug (yellow) from rotating. 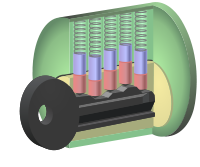 When an incorrect key is inserted into the lock, the key pins (red) and driver pins (blue) do not align with the shear line; therefore, it does not allow the plug (yellow) to rotate. 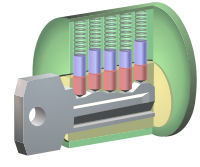 When the correct key is inserted, the gaps between the key pins (red) and driver pins (blue) align with the edge of the plug (yellow). 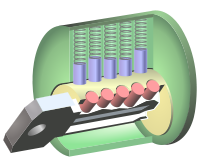 With the gaps between the pins aligned with the shear line, the plug (yellow) can rotate freely.

Commonly pin tumbler locks are found in a cylinder that can be easily unscrewed by a locksmith to facilitate rekeying. The first main advantage to a cylinder lock, also known as a profile cylinder lock or euro, is that the cylinder can be changed without altering the boltwork hardware. Removing the cylinder typically requires only loosening a set screw, then sliding the cylinder from the boltwork. The second is that it is usually possible to obtain, from various lock manufacturers, cylinders in different formats that can all be used with the same type of key. This allows the user to have keyed-alike, and master-keyed systems that incorporate a wide variety of different types of lock, such as nightlatches, deadbolts and roller door locks.

Typically, commercial padlocks can also be included, although these rarely have removable cylinders. Standardised types of cylinder include:

There are also standardised cross-sectional profiles for lock cylinders that may vary in length – for example to suit different door thicknesses. These profiles include the europrofile (or DIN standard), the British oval profile and the Swiss profile

Some types of cylinder lock are vulnerable to an attack called lock snapping.

An electronic / digital cylinder is a locking device which operates by means of electric current. Electric locks are sometimes stand-alone with an electronic control assembly mounted directly to the lock. More often electric locks are connected to an access control system. The advantages of an electric lock connected to an access control system include: key control, where keys can be added and removed without re-keying the lock cylinder; fine access control, where time and place are factors; and transaction logging, where activity is recorded.

The basic pin tumbler lock alone is vulnerable to several lock picking methods and attacks, the most common ones used by criminals being lock bumping and snap guns. To combat this, many higher security cylinders incorporate the use of specialised pins known as security pins which are designed to catch in the lock cylinder if a snap gun or bump key is used.

Lock snapping is a method of forced entry that only affects certain types of cylinder lock, such as the euro cylinder which are commonly found on uPVC doors in Europe.[6] Lock snapping is when a force is applied to the lock cylinder, usually with a pair of mole grips / locking pliers and ripped out from the door, allowing access to the latch mechanism.[7][8] It can take between 50 seconds and 2 minutes to snap the lock and gain entry.[6][9] Police in the UK have estimated that around 22 million doors throughout the country could be at risk from lock snapping.[10]

Lock snapping is possible because the lock has a weakness where the retaining bolt passes through a thinner part of the lock. A recent development is to build a lock with a front section that snaps off the main body leaving enough lock that prevents access to the operating latch. Some designs feature more than one sacrificial section which stops the door being opened from the attacked side (even with the key), but the door can be opened from the other side. Most locks sold in the UK since 2010 have been designed to reduce the risk of this attack. You can reduce the threat of cylinder snapping by using cylinders designed to prevent the method of attack, cylinders that prevent this method of attack will meet TS007 3 standard. TS007 3 star cylinders will preferably be fitted in conjunction with a high security mechanism and handle set.